The Japanese Attack on Pearl Harbor

5%OFF for total of 30 pages ordered 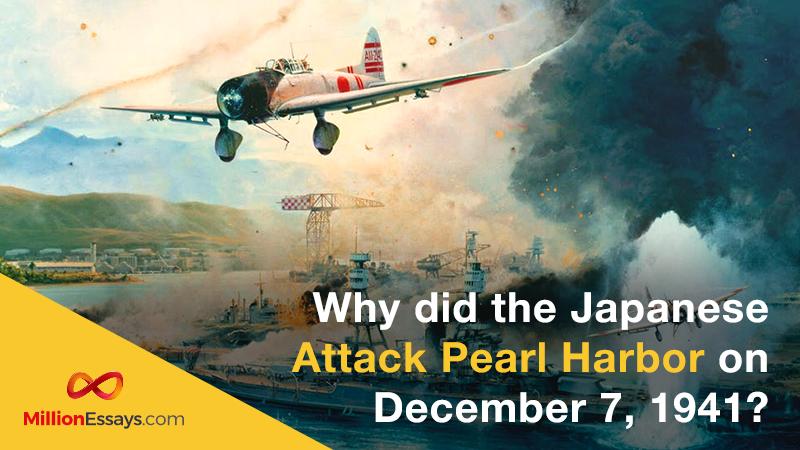 Why did the Japanese Attack Pearl Harbor on December 7, 1941?

The Japanese attacked Pearl Harbor on December 7, 1941 for several reasons. Many historians acknowledge that the majority of all the American forces were naval and the main naval force in the Pacific was Pearl Harbor, which was the closest American navy target to Japan. The favorable geographical positioning ensured the Japanese that they will get a quick victory over the American fleet in the Pacific.

Benefit from our service: Save 25%

Along with the first order offer - 15% discount (with the code order15off), you save extra 10% since we provide 300 words/page instead of 275 words/page

The Hawaiian Islands with mild annual temperature of 75 degrees Fahrenheit and tropical climate, with cooling ocean breezes, rainforests and dramatic stretches of beach at the foot of majestic mountains and volcanoes attracted the Japanese, who lacked the territories and natural resources. These islands, between Japan and the United States, are a perfect military base, first for naval attack and then for air power. The land was fertile and the beaches, when properly cultivated, yield immense crops of American, Japanese and international tourists. Japan perceived the islands as a potential opportunity to expansion. Since before the Russo-Japanese War, Japan had been full-steam-ahead modernizing, manufacturing and upgrading its military.

The tension between the USA and Japan started in the 1930s because of China. In 1931, after conquering Manchuria, which was a part of China, Japan was hoping to conquer the rest of China. Another reason that has led both countries to the road of war was the fact that in 1940, the Japanese government supported Nazi German in the Second World War and occupied Indochina in the following year. The United States had its own important economic and political interests in China and East Asia. That is why they were alarmed by the Japanese politics. Thus, the USA began to strengthen its military dominance in the Pacific and launched a program of financial support to China. On the other hand, they limited the shipment of oil to Japan, as well as other raw materials. The Japanese government was not satisfied with the U.S. policy. It has viewed the new American measures against Japan, as a serious threat to the nations survival, since Japan was poor in its own natural resources. Searching for the new territories in Southeast Asia, which were rich in different natural resources, the Japanese government realized that the war between the United States and Japan was inevitable.

Real or imagined, the U.S. Fleet posed a threat, and the Japan viewed Hawaii with special interest. The situation got worse, as Japan felt strangled and besieged. When war erupted in Europe, and the United States did not intervene, as France and Britain became embroiled in conflict with Germany, America it seemed, wanted neutrality; perhaps they would overlook expansions in Asia. Japanese and American spheres of influence grew, and their relations had gotten worse. The U.S. Pacific Fleet, based at Pearl Harbor, was a real danger for the Japanese and they decided to devise a plan, the main idea of which was to start the war against the USA with a so-called surprise attack. The author of this plan was Admiral Yamamoto, the commander of the Japanese fleet. According to this plan, the formation of an attack force was formed. The purpose of this immediate attack was to destroy the American fleet together with the planes without any chance to intercept the Japanese.

In conclusion, the Japanese government made a decision to attack Pearl Harbor and the U.S fleet on December 7, 1941, mainly because of the purpose to have dominance in the Pacific. Japan was searching for raw materials and natural resources. Moreover, the Hawaiian Islands is a marvelous place due to its geographical location and climate.

Order from our company and
save your money, time, and energy

Some text in the modal.