Poetic Devices to Spice up Your Slam Poetry

Home/Poetic Devices to Spice up Your Slam Poetry

5%OFF for total of 30 pages ordered 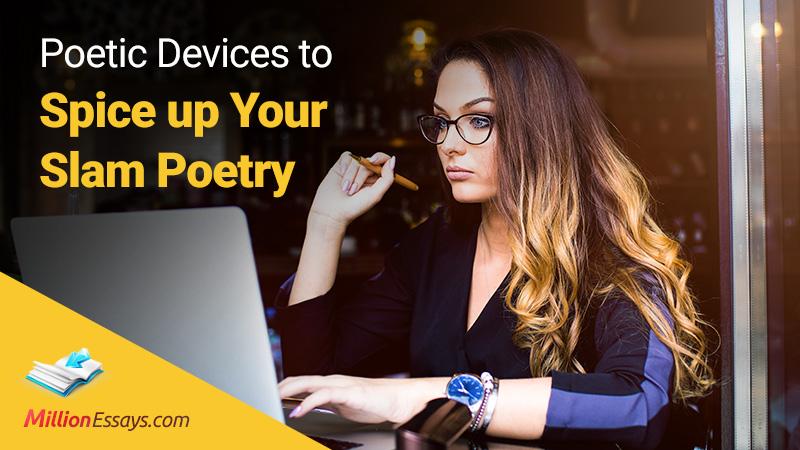 How to Write Good Poetry

Preparing for a poetry slam, you need to exert maximum effort and use your poetic skills. However, do not be upset if you do not have enough experience. Here are a few poetic devices to help you write good poems.

Repetition demonstrates the importance of the described object, process, action, etc. When using this device, the author repeatedly mentions something especially agitating it and concentrating the reader's attention on it.

Under alliteration, linguists understand a special literary device, which consists in the repetition of one or a number of sounds. At the same time, the high frequency of these sounds in a relatively small speech segment is of great importance. For alliteration, the irregular repetition of sounds is typical, and this is the main feature of this literary device. Typically, the technique of alliteration is used in poetry, but in some cases, alliteration can be found in prose. Alliteration differs from rhyme by the fact that repetitive sounds do not concentrate at the beginning and end of the line.

The metaphor is based on the similarity of a particular feature of two different objects; the property inherent in one object is assigned to another one. Most often when using metaphors, the authors apply words, the direct meaning of which serves to describe the features of inanimate objects and vice versa.

The comparison is one of the expressive methods, in which certain properties (characteristics of an object or process) are revealed through similar qualities of another object or process. In this case, an analogy is made so that the object, the properties of which are used in the comparison, is better known than the object described by the author.

Thus, the author emphasizes the most important properties (in his or her opinion) of an object for a given context. Such a technique as a negative comparison is also often used in poetry. At its core, this analogy is similar to the usual comparison, but the author emphasizes that objects or processes that have common features are not the same. That is, identifying the similarities between the two objects, the poet at the same time focuses the reader’s attention on the fact that the described object has its own unique qualities.

When using hyperbole, the author describes the object or action so that some of their qualities are greatly exaggerated. The use of this expressive means allows you to make a particularly strong impression on the reader.

The use of inversion is based on unusual word order in a sentence, which gives the phrase a more expressive shade. Inversion performs an accent or semantic function in poetic texts, a rhythm-forming function for building a poetic text, as well as the function of creating a verbal-shaped picture. In prose works, inversion serves to place logical stress, to express the author's attitude to the characters and to transfer their emotional state.

The irony is a powerful linguistic tool, which has a tinge of ridicule, sometimes a slight mockery. When using irony, the author applies words with opposite meanings so that the reader can guess the true properties of the described object or action.

The sarcasm is a technique used to demonstrate a scornful, contemptuous attitude. As a rule, the use of sarcasm is negative, while the author builds the phrase in such a way that it looks like a mockery.

At its core, the epithet is a definition of a subject, action, process, event, etc., expressed in the artistic form. The epithet, as a rule, is used to focus on one of the properties of the described object, process or action.

When using this linguistic tool, the author arranges theses, arguments, his or her thoughts, etc. in order to increase their importance or persuasive power. Such a consistent presentation allows multiplying the significance of the stated thoughts.

Now you know how to write a good poem. However, if you do not have enough time or inspiration, you can use professional poem writing services.

Order from our company and
save your money, time, and energy

Some text in the modal.